And now, a story about trying to survive a tough economy by relying on a rich neighbor.

The state of New Hampshire has been building up its reputation as a low-cost alternative to neighboring Massachusetts. They market it as the New Hampshire Advantage.

StateImpact's Amanda Loder reports on whether the campaign has actually been an advantage for the state.

AMANDA LODER, BYLINE: Nashua, New Hampshire is right on the Massachusetts border, and a lot of the cars parked here at Nashua's Pheasant Lane Mall have Massachusetts plates.

It's cheaper to do your back to school shopping here, because unlike its neighbors, New Hampshire doesn't have a sales tax. But the state depends on Massachusetts for far more than retail sales.

DENNIS DELAY: New Hampshire is a median-cost state in a high-cost region.

LODER: Dennis Delay is an economist with the New Hampshire Center for Public Policy Studies. Because the state doesn't have sales or income taxes, it has one of the lowest tax burdens in the country. And Delay says New Hampshire's relatively low unemployment rate of 5.4 percent has been shaped by business decisions made in the 1970's, '80s and '90s.

LODER: That made New Hampshire a magnet for well-educated, highly paid workers. Today, the state's high-tech industries are mostly clustered in southern cities, near Boston. But drive about 90-miles to the northwest, near Dartmouth College and the Vermont border, you can still feel the Massachusetts influence.

LODER: Inside the lab at the drug discovery company Adimab, a robotic arm drops yeast into plastic trays. Company co-founder Tillman Gerngross believes it could yield drugs to treat a number of diseases. Many start-ups in this rural corner of the state have been lured away to the Boston area. But Gerngross sees the up-side of owning a business in low-tax, low-regulation New Hampshire.

TILLMAN GERNGROSS: We're glad to live here where we're not really being bothered...

GERNGROSS: ...and are not encumbered by excessive legislation.

LODER: If you go about 60 miles east of Adimab, you hit the shores Lake Winnipesaukee. This is where wealthy New Englanders - like Mitt Romney -enjoy their multimillion dollar summer homes.

And Joe Skiffington builds them. The market was hot a few years ago. But today, nearly 100 For Sale signs dot the scenic landscape. He says the tough market is tied to the falling fortunes of financial barons in Massachusetts, Connecticut and New York.

JOE SKIFFINGTON: If you say a typical client had a $50 million net worth in 2007, and in 2008 it was 25 , he lost half his net worth? That person is not going to be inclined to go out and buy a $3 million second home, even though he's still technically wealthy with a $25 million net worth.

LODER: Continuing through the White Mountains into New Hampshire's far north, you're closer to Canada than Massachusetts. This sparsely-populated area was once dominated by paper mills. Now, only one remains, and the region has the state's highest unemployment rate. The high-tech industries that feed off Massachusetts' success are in short supply up here.

ROLLIE LECLERC, MILL WORKER: That's why, when our kids go to college, it's like a farewell. They never come back.

LODER: Although the New Hampshire Advantage tapers off as you move northward, it may also be eroding. Right now, economists say the state's floating along on decisions it made decades ago. But despite the favorable tax environment, the flow of people moving into the state has slowed recently. Fewer, it seems are seeing a real New Hampshire Advantage. 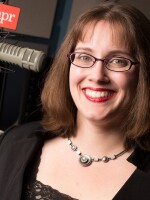 Amanda Loder
Amanda Loder reports on business and the economy in NHPR's newsroom, and hosts Weekend Edition. Amanda joined New Hampshire Public Radio following four years of reporting and hosting at Spokane Public Radio in Washington State. At Spokane Public Radio, she was recognized with regional Edward R. Murrow and SPJ awards for her feature and series reporting. During four years at SPR, she worked her way up from general assignment reporter to featurist, and was ultimately tapped to host All Things Considered. Amanda, a native Iowan, received her Bachelor’s degree in Spanish and Religious Studies from Lawrence University, and a Master’s degree in Broadcast Journalism from Syracuse University.
See stories by Amanda Loder
Latest Stories