If you ever get a chance to visit Baltimore, you will find an amazing harbor, lots of John Waters fans, references to Edgar Allan Poe and thousands of vacant, boarded-up buildings. Like many other American cities, Baltimore is trying to figure out what to do with those abandoned structures. And the plan it's come up with is comprehensive. It means government officials are going to have to make some hard choices about which neighborhoods are worth saving and which are not. From member station WYPR in Baltimore, Stephanie Hughes has the story.

STEPHANIE HUGHES, BYLINE: It's not every open house that begins with the signing of a liability waiver.

NIKKI COOPER: You know, we encourage you to be careful. You know, safety - you know, if you feel unsafe, please come out immediately.

TERESA STEPHENS: I'm going to suggest not going in too far, just for safety purposes.

GAYNOR: I've got a flashlight, and I've got shoes that can take the mud, because it's raining. I was going to bring a can of bug spray, but it looks like we're good.

HUGHES: The building is available through the city's Vacants to Value program, and it's the sort of place that looks like it could be harboring bugs. The home has been empty a while, with a boarded up door. And in the back, what may have once been a kitchen is now missing a wall.

HUGHES: The house where Gaynor might one day live is what city officials call an emerging market, with only a few vacant buildings. In those communities and in areas next to major developments, like Johns Hopkins Hospital, the city is focused on getting the vacants fixed up and occupied. The rest? Here's Julie Day of Baltimore city housing.

JULIE DAY: We probably have about 10,000 buildings that we need to demolish. Those are intractable blight in blocks that are just not, you know, structurally viable or there's no foreseeable time when there will be a market.

HUGHES: Those sorts of choices are difficult for the city to make: it's hard to tell residents that their neighborhood isn't going to improve. Demolition is also expensive, requiring more than $165 million dollars, which Baltimore just doesn't have. But this strategic approach has been identified by the Brookings Institution as a good one, because it provides a plan for every structure, even if the plan is to knock it down. For the places left standing, the city hosts workshops on what it takes to restore these buildings.

ROB MOORE: Expensive. But it's worth it.

HUGHES: 40-year-old Rob Moore is a future landlord. He was at a recent workshop on permits. At these events, the marketing team wants the public to see the possibilities in the vacants, so they hand out actual rose colored glasses, along with advice for new homeowners.

MOORE: In the long run, somebody's going to have a nice, warm home. I bought these rehabs to make money. And investing in these properties will, in the long run, make somebody else happy. I know I will be a good homeowner.

HUGHES: Two years into the program, about a tenth of the city's vacants have been rehabilitated or are on their way. Though it may be slow going, people like Moore say it's necessary work.

MOORE: I think the vacants paint a picture of what the city is. You know, a broken down city. The sooner that the vacants are taken care of, I think people will start to take Baltimore more serious.

HUGHES: To plan for this serious future, Baltimore needs to attract people who are actually dreamers, those who are able to envision a different version of the city, even without a pair of rose-colored glasses. 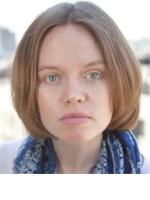