Kodak expects to emerge from bankruptcy this year as a new company with a new focus. The one-time photo giant finds itself operating in a more competitive and diversified market.

KATE O'CONNELL, BYLINE: According to the company's reorganization plan filed this week, Kodak could emerge from Chapter 11 as early as July. Post-bankruptcy, the company will realign itself as a commercial printing business. Consumers can expect to see labels and packaging printed by Kodak technology. But the only products we'll see carrying the iconic red and yellow label will be made by other companies.

Kodak officials say the business is set for a profitable and sustainable future.

CHRIS VERONDA: There's a number of innovative products and innovative and unique technologies and we have a great group of partners in the industry that we're working with.

O'CONNELL: Company spokesman Chris Veronda says Kodak's declining revenue is projected to rebound as early as next year, tracking towards more than $3 billion in sales by 2017.

GEORGE CONBOY: The old Kodak was a behemoth in their marketplace. They'll be selling equipment that has good technology but as a niche player they will have to struggle for market share.

O'CONNELL: Conboy says Kodak's also heading into a market projected to be stagnant for at least the next five years. He says a lack of growth will make it difficult to gain business, a position the company is unfamiliar with. 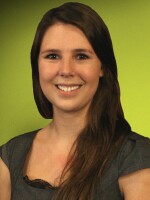