GREENE: That would be billionaire investor Warren Buffett. He welcomed morn than 30,000 Berkshire Hathaway shareholders to Omaha over the weekend and he offered a bit of insight into what Berkshire might look like without him at the helm.

HILARY STOHS-KRAUSE, BYLINE: Berkshire Hathaway shareholder Santa Susarapu of San Francisco has traveled to the annual meeting the last six years. He says he comes for more than just the investment and finance talk - he also makes the trek to be near CEO Warren Buffet, known as the Oracle of Omaha.

SANTA SUSARAPU: I think it is really amazing to see the type of human being who he is. And I think in this day and age, it's very rare to see that, and that's one of the reasons I come here.

STOHS-KRAUSE: The big topics of the weekend, touched on time and time again during a five-hour Q&A session on Saturday, where Berkshire Hathaway's increased size and questions about who will take over as CEO when the 82-year-old Buffett steps down.

While admitting the company's expansion has changed things - some for better, some for worse - Buffet demurred when it came to succession specifics.

But shareholders I spoke with weren't too concerned about the question of the next Buffett. Angel investor Karen Linder of Omaha, author of the book "The Women of Berkshire Hathaway" and a longtime shareholder, says knowing there is a succession plan in place helps, even if it hasn't been fully revealed. Overall, she says, the company is very open.

KAREN LINDER: As shareholders of several companies, this is probably one of the most transparent. And we get more communication from Berkshire than maybe some of our other holdings.

STOHS-KRAUSE: Buffett says he has no plans to leave anytime soon. One analyst told cancer-survivor Buffett he hoped he'd be sticking around a long time. Buffett joked that he hoped so, too. 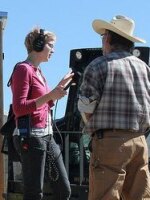