Today the University of Oklahoma expelled two students involved in a racially charged video that surfaced over the weekend. It shows members of Sigma Alpha Epsilon using a racist slur to refer to African-Americans as they chant about lynching and never allowing black men to join their fraternity. Today is also the deadline for SAE to leave campus, as Kate Carlton Greer of member station KGOU reports.

KATE CARLTON GREER, BYLINE: Workers wheeled boxes of food out of the Sigma Alpha Epsilon fraternity house this morning. The parking lot was almost empty. The SAE letters had already been removed from the building. The quiet house is a stark contrast to the short video clip that ricocheted around social media and gained national attention. The response was swift. The SAE national fraternity closed the OU chapter. The university condemned the video and promised strong action. On campus today, students like Junior Chris White are still talking about the recording.

CHRIS WHITE: I'm really just glad it was exposed because there's a lot of naive people here on campus who think that it doesn't exist. I think it opened a lot of eyes.

GREER: The University of Oklahoma did not respond to interview requests about the expulsion. OU President David Boren released a statement saying he hopes students involved would learn from the experience. Questions had swirled what would happen to the fraternity members. St. Louis University Law Professor Justin Hansford says constitutional free-speech issues don't apply in this case.

GREER: Russell Bouyer is an adviser of Unheard, the black student group at OU which received a copy of the video and posted it online. He says there are bigger issues that need to be talked about beyond what was on the tape.

RUSSELL BOUYER: I think we need to open up and talk about it and have a conversation. These things are extremely uncomfortable no matter if you're the aggressor or the victim.

GREER: Bouyer says minority students may wonder how inclusive the university really is. Just 5 percent of the student body is black. OU Junior Chris White hopes change will happen, but he isn't optimistic it will be soon.

WHITE: I think it's going to take a long time for it to actually progress into something that can be big.

GREER: It's unclear what might happen to the other students shown in the racially charged video. Tomorrow there's a town hall meeting on the OU campus to discuss diversity. For NPR News, I'm Kate Carlton Greer in Norman, Okla. Transcript provided by NPR, Copyright NPR. 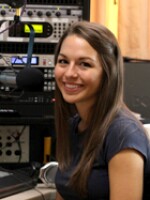 Kate Carlton Greer
Kate Carlton Greer is a general assignment reporter for KGOU. She covered Oklahoma's efforts in tornado response and recovery as part of KGOU's "Ahead of the Storm: The Oklahoma Tornado Project" from October 2013 through September 2014. Kate also served as the Community Calendar Producer from January to August in 2013. She grew up in Flower Mound, Texas, and studied broadcasting and electronic media at the University of Oklahoma.
See stories by Kate Carlton Greer
Latest Stories