After hundreds of years of mainly focusing on the aftermath of hurricanes, this is the first hurricane season that North Carolina has a "chief resilience officer," tasked to think ahead in new ways to bolster the state against the effects of climate change.

Resilience officers, or officials who have such duties as part of their job, are fast becoming a typical part of local government in coastal areas. But just a handful of state governments have them.

N.C. Emergency Management Director Michael Sprayberry said ever more powerful and more frequent storms, as well as the rising sea level, have made finding ways to blunt the effects of climate change crucial.

The new Office of Recovery and Resiliency falls under him.

"I'm really excited about integrating resiliency with all of our different disaster programs," Sprayberry said. "That's going to be key to our success going down the road as we keep seeing these extreme weather events."

As he talked, Sprayberry ran a finger down a list of federally-declared disasters his office is working to help the state recover from. He counts eight - four of them hurricanes, and that doesn't include Hurricane Dorian, which President Trump later declared a disaster.

"Ever since Matthew, 75 out of 100 counties have had a federal disaster declaration, some of them three times," Sprayberry said. "That's Matthew, Florence, and tropical storm Michael. You add in wildland fires, which we got a federal declaration for, and we see billions of dollars worth of damages."

In other words, it seems possible the state may never again be fully out of disaster recovery mode.

"We have to ask ourselves the question, 'Are we going to continue to execute recovery operations the same way that we used to?" Sprayberry said. "I think that everybody in a bipartisan way agrees that we shouldn't."

North Carolina's first chief resilience officer is Jessica Whitehead, who said much of the role still has to be fleshed out.

But among other things, resiliency at the state level is expected to mean things like helping formulate policy recommendations, making sure resiliency is taken into account when recovery money is spent, piecing together funding sources to help local governments pay for resiliency projects, and helping those local communities do resiliency planning.

"The idea of doing this at a statewide level is really very new," Whitehead said. "So it's a little bit daunting to come in and try to create something from the ground up. And so at this point, I've been on the job for three months, and we have a lot more ideas than actual, 'this is going to be our policy.'"

"And I think that's probably where we want to be at this point, because resilience is really difficult," she said. "We want to make sure that we've done our homework before we start creating those policies."

Whitehead knows the turf. In her previous job with North Carolina Sea Grant, she worked with communities across Eastern North Carolina on resiliency planning.

"To really build a community's whole resilience, its ability to not just absorb and recover from disasters, but to build to where we should be to cope with future disasters," she said, "that really requires somebody who can step back and coordinate across all of these different departments."

When it comes to resilience at the local level, every community has its own priorities. The top problem for one may be a vulnerable wastewater plant in a low spot, while for another, the biggest challenge may be a road that floods easily or an unusually low neighborhood.

One of the towns Whitehead worked with while she was at N.C. Sea Grant was Nags Head, which has been one of the most aggressive communities on the coast in planning for sea level rise, more and heavier rainfall events, and other issues related to climate change.

Holly White is principal planner for the town and focuses on resiliency. She said that for the local officials on the front lines of the battle against climate change, the state's new emphasis on resiliency is comforting.

"It's someone there to have to be an advocate for local communities and to help with a strategy that is not post-storm, but ... maybe turning a corner to think more pre-storm," she said.

White said that for local government officials just beginning to ponder resilience, the topic can be intimidating.

"But it shouldn't be," she said, "because so many of these functions we're already doing as local government. It just becomes about having an understanding of how your community will be impacted and then planning for that." 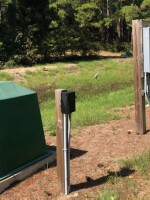