From NPR News, this is NEWS & NOTES. I'm Ed Gordon.

In 1963, civil rights activist Medgar Evers was gunned down in the driveway of his home, in full view of his wife and children. Forty-two years later, the shooting is the only thing most people remember about Evers. His widow, Myrlie Evers-Williams, wants to change that. She's created her husband's autobiography, relying on his speeches, writings and personal letters.

Ms. MYRLIE EVERS-WILLIAMS (Widow of Medgar Evers): Medgar was an integral part of the civil rights movement that began long before the media exposed America to the struggle of those who had embedded into their very being the hunger for justice and equality. Those freedom fighters possessed raw courage and bravery, enhanced by a generous dose of determination to secure these rights at all cost. They were aware that the ultimate price, the loss of life, might be their price.

GORDON: Myrlie Evers-Williams, thank you so much for joining us. Appreciate it.

Ms. EVERS-WILLIAMS: It is my pleasure to be with you.

GORDON: Let me ask you: After all of these years, what made you want to put this book together?

Ms. EVERS-WILLIAMS: Well, that's part of the problem. After all of these years, Medgar is still mentioned only in regards to his death: a man who was assassinated June the 12th, 1963, civil rights leader, Mississippi. And for a very long time, I have wanted very badly to see that the public had a chance to know Medgar as an actual living person.

GORDON: Let me ask you this, in terms of what he went through. It really should be `we went through,' because you all were very much a team as you moved into Mississippi and fought the good fight. I'm curious; in terms of that teamwork, I would think, albeit dangerous, it must have been exciting for the two of you as well.

Ms. EVERS-WILLIAMS: You know, it was exciting, because I came from a family whose philosophy was `Don't rock the boat.' And then I met Medgar the first hour, the first day, on the campus of Alcorn A&M College. His thing was `Rock the boat. That's what we're supposed to do.' I came to understand his need to be involved in changing America, and that was the broad goal that he had. Medgar was a World War II veteran and came home, as he said, to find that he was still a `boy.' His father was still a `boy.' His mother was still `girl.' There were all kinds of obstacles in obtaining real citizenship in America.

GORDON: Want to get into present-day civil rights in a few moments with you, but I want to talk to you about developing the book. While you were doing this--and I know that because his name is evoked so often, his spirit is not far from any of us and, obviously, from you, but this must have been a rush of memories to look at some things that I would think perhaps you've not looked at in years.

Ms. EVERS-WILLIAMS: You are correct, and it was extremely difficult for me to go back to those papers, to touch them, to see Medgar's handwriting on some of them. One of the documents that's on the cover of the book is Medgar's driver's license. Our son worked with the photographs. It was a changing time for him and for me, because Medgar's blood's still on that driver's license. It shows up a little bit in the photograph. Sitting and reading the cases, all of those things that happened to people so long ago, yet not so long ago, just brought back a rush of feeling, of anger, of sadness, of despair, of determination that this book would be something that could be shared with people for years and years to come, and particularly impact our young people today. And I'm so hopeful that that is what will happen.

GORDON: I'm curious; as you went through all of these things, did you find out anything new? Did you find something that you did not know?

Ms. EVERS-WILLIAMS: Ed, you know, I'm sure I did, because I didn't know it all. But I think with the time that's passed, it gave me, perhaps, a more mature and deeper insight into Medgar the man, and that time--I found myself saying on occasion, `Oh, my goodness, I forgot that happened.' The mystery of so much of that period of time was just unlocked for me. You know, I had to go back to that 21--questionnaire that we had to take before we could receive our poll tax and vote. It reminded me of one of the questions: How many beans in this jar? How many bubbles in a bar of soap? All of those asinine things that we had to go through at that period of time, of looking at pictures of--so many of the young people were put in what we called a concentration camp in Jackson. It was a fairground with barbed wire around it, and those young people were there, along with their elders, and they were brought food in tin tubs, and the policemen would spit in the food in front of them to taunt them. I mean, just memory after memory began to come back, and I have to admit that I had nightmares.

GORDON: Let me ask you this, and I've asked this of Mrs. King, and I mean this in the best way. But to a great degree, we often forget that those who continue, those who live through this, ofttimes become reluctant national figures. Has it been difficult, at times, for you?

Ms. EVERS-WILLIAMS: I could give you a very quick answer and say yes, it has. I was a very, very shy person, and I found myself propelled into the spotlight as Medgar's widow. I assumed the public role that was really placed upon me because I felt as long as I was publicly available and visible, that people would not forget Medgar. I'm very fortunate in the sense that my life has not been just a life around Medgar and the movement. I went back to college after a 10-year absence and got my degree, did some advanced work. I've worked in corporate America. I was one of the few women who ran for Congress back in 19 and 69. I've been very active in politics. And I guess the crowning glory of all of that came when I assumed the chairman of the board of the NAACP.

What people don't know, too, is the other pain that you suffer. I went on to remarry a wonderful man who said that he really didn't care if we were a marriage of three people, and that's exactly what we were. And he supported me in everything; he did. But Walter was very ill with prostate cancer, and I said I could not leave him to go to run for this chairmanship of the NAACP. And he said to me, `It's something you must do, and this is the last thing I'll ever ask you to do for me.' So what was I to do?

GORDON: Let me ask you this before I take you to present day. Byron De La Beckwith, who in 1994, after a third trial, was convicted of the murder of your husband--here is a man who really--and I heard an audible sigh there when I said his name. I would suspect--and I don't want to presuppose that you don't, but you had to fight hatred for this man.

Ms. EVERS-WILLIAMS: You know, I'm not sure I've ever fought hatred. That's a part of life. Yes, I did hate him. In the very beginning, the first--I will tell you, the first year after Medgar's death, I was--hate was my motivator. I was able to put up, I think, a magnificent front. I'll refer to my daughter, who was eight years old at the time, and she was what helped to move me away from that period of hate, even with Beckwith. And it was something that she said. She said, `Mommy, you're talking to these people like you hate them. You're talking about them like you hate them. And Daddy said we shouldn't hate.' And it was as though the light went on, and I remembered Medgar saying to me after we had received lots of nasty, threatening calls and I had expressed myself relatively--well, in a very strong manner, and he said, `Myrlie, don't do that, because those people that you hate, most of them don't know it, and those that do could care less. You end up being the victim.'

GORDON: Let me ask you this before we let you go. And it's been marvelous talking to you, as always.

GORDON: We've had Kweise Mfume on recently, Julian Bond on recently, and I will admit to being critical ofttimes of late of the NAACP in terms of the direction and where we're going and what we need. It seems to me that the civil rights community has become--and I don't want to romanticize the past, either, but perhaps a little more political than it needs to be. I'm wondering how you see where we are today.

Ms. EVERS-WILLIAMS: The NAACP, as we love to say, is the oldest, the strongest civil rights organization in the nation. When I was chairman, we were at our lowest point. We went through a period of transition then. People--the public said to us, `Why don't you change the name of the association? It's old.' My response to that: `Well, it's not old, because if we look at the world, there are more people of color in the world than there are those who are designated white.' But what I would hope, as the NAACP continues to redefine itself, where we can speak to Congress and others in a single voice, because that's what people in power respect. They see us--and I mean `they' in Washington and in statehouses--they see us as separate entities who cannot connect, who are not together, and it's `Why should we worry about them?'

GORDON: Well, the book is titled "The Autobiography of Medgar Evers," and one of the very interesting points that you made is, too often in today's world, we describe people with one line. And if you ever wanted insight to a great man, this is the book. Myrlie Evers, as always, so nice to talk to you.

Ms. EVERS-WILLIAMS: Thank you. It's my pleasure. 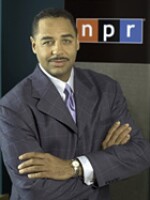