"Greetings in Jesus' name, dear friend, I am the widow of Idi Amin."

Chances are, you've received a scam e-mail like that more than once.

The relative of a rich African dictator is trying to reclaim a lost fortune, or a famous person is trapped somewhere with a billion dollar inheritance just out of reach. They need your help — OK, more specifically, a few thousand dollars of your cash — to get started.

Those e-mail cons often originate in West Africa, and are commonly referred to as "419 scams," after the applicable section of Nigeria's penal code. Thousands of American citizens fall for these scams each year, according to the U.S. State Department, and some victims lose thousands of dollars in the process.

But there's a growing online community of people called scambaiters who seek revenge against 419 scammers.

When they receive a 419 e-mail, instead of deleting, they reply — then they proceed to waste as much of the scammer's time as possible. Often, scambaiters will try to humiliate the Internet con artists by tricking them into creating photos, videos, or audio recordings which can later be posted on scambaiter Web sites as "trophies."

One such video recently popped up on YouTube: Two Nigerian men stand over a birdcage at a shop counter, debating whether the parrot at the bottom of that cage is dead. It's a remake of a famous Monty Python comedy sketch from the 1970s, and it's the work of scambaiter "Shiver MeTimbers," UK resident Mike Berry.

About six months ago, Mike received a scam e-mail from a man in Nigeria who claimed to be rich and dying of cancer. The scammer wanted Mike's help, and of course, Mike's cash, distributing tens of millions of dollars to charity before he died.

But the man from Lagos wasn't dying of cancer, and his story wasn't true. Through a complicated chain of e-mails that lasted more than six months, Mike persuaded him to re-create the Monty Python parrot sketch, promising to enter it in a phony film contest with a cash prize. The resulting video shot to the top of YouTube's hit rankings, and has become an instant Internet classic.

Mike Berry has been scambaiting for five years. In that time, he has posed as a priest, a pirate, a scientific researcher --even an adult-video impresario. He has published the long and often hysterical e-mail chains between him and the scammers he taunts on his Web site, and some are collected in his book: Greetings in Jesus Name! The Scambaiter Letters. But Mike insists that the site has become more than just a good joke for him; he sees it as a way to keep criminals harmlessly occupied, so they won't be able to scam real victims.

Mike manages one of many online "scambaiting" sites, 419eater.com, where he and others mentor aspiring scambaiters.

"Scambaiting is not a sport you want to jump into without previous knowledge," he says.

And he doesn't recommend trying this at home. Even experienced scambaiters are in danger when angry Internet con-men realize they've been had.

"The golden rule is: Do not give out any real information whatsoever — your name or your e-mail, the country you live in," he cautions. "The scammer who's writing you may live 3,000 miles away, but he may have friends who live near you, and these are not people you want to mess with." 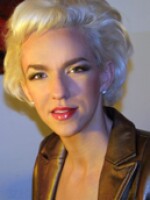 Xeni Jardin
Xeni Jardin can be heard on NPRs Day to Day, offering technology insights for listeners nationwide. Jardin is also a contributing writer for Wired Magazine, as well as a tech culture journalist and co-editor of the collaborative weblog BoingBoing.net, the award-winning "Directory of Wonderful Things."
Latest Stories