Not Just Another Pretty Head Shot

A head shot is a performer's calling card, an 8 x 10 photograph that actors use in hopes of getting their big break with a director or casting agent.

Most head shots are straightforward pictures of an actor's face. But every now and then, someone decides to get a bit more creative. Like Kitten Kay Sera, pictured holding her dyed-pink dog, Miss Kisses. Or actor Ray DeFeis, who posed in women's lingerie, holding a cupcake tray. Or Shelley Krawchuck, who posed for her head shot on a beach ... while sitting on a toilet.

These are some of the head shots featured in Holy Headshot! A Celebration of America's Undiscovered Talent, by Patrick Borelli and Douglas Gorenstein.

The idea first came about when Borelli, a writer and comedian, was producing a variety show featuring elderly people. He didn't know too many gray-haired talents, so he put out a call in Backstage magazine.

"I got probably over 100 head shots," he says, "and that wound up being my favorite part of the show, flipping through those head shots."

Borelli teamed up with Gorenstein, who takes head shot photos for a living, and the two looked for the most entertaining, and often bizarre, photographs they could find. They put out a call and received over 50,000 head shots.

"We had a system where we looked at a shot and if it took our breath away, if we had a visceral reaction to it, we knew we were on the right track," says Gorenstein.

In the end, they picked 103 head shots, which are accompanied in the book by each performer's resume.

Some of the photos are professional actors who just have odd looks, like the 5-foot-8-inch, 115-pound actress Linda Leven. Other head shots look like more like grainy photos from family camping trips.

"And then there's crazy people," Borelli says. Like the guy who is dressed from head to toe in rainbow-colored feathers, and the woman whose head shot features tiny plastic babies crawling across her face.

"I think some of the people are thinking this is funny and will get noticed," Borelli says.

Though these head shots may not be landing huge roles in Oscar-winning films, many of these performers are getting work. Gorenstein says he recently got a call from one of the actresses, who said she just got a call from a manager. He had seen her video on the Holy Headshot! Web site, she said. 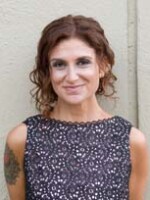 Alex Cohen
Alex Cohen is the reporter for NPR's fastest-growing daily news program, Day to Day where she has covered everything from homicides in New Orleans to the controversies swirling around the frosty dessert known as Pinkberry.
Latest Stories