U.S. And China Agree To Cooperate On Climate Crisis, Despite Fraught Relationship

The U.S. and China are the world's two biggest emitters of greenhouse gases. When President Biden's climate envoy, John Kerry, met his Chinese counterpart last week, they promised to cooperate to fight the climate crisis. NPR's John Ruwitch asked, will they really?

JOANNA LEWIS: And this caught many, you know, countries by surprise that not only, you know, are the United States and China announcing their targets a year in advance, they were doing it together in front of the rest of the world.

RUWITCH: Joanna Lewis, an expert on the climate in China at Georgetown University, says it paved the way for the Paris climate agreement a year later.

LEWIS: But, yeah, I think we're in a different situation now.

RUWITCH: Very different. Former President Trump called climate change a hoax and withdrew the United States from the Paris accord. He also adopted a much more confrontational approach to Beijing, one that the Biden team has not jettisoned. Relations are at their worst in decades, which means robust scientific cooperation is probably not coming back anytime soon. Li Shuo is a senior policy adviser at Greenpeace in Beijing.

LI SHUO: It's hard for the Chinese not to be too cynical about this, right? Because they've seen this many times.

RUWITCH: The U.S. pushed China and others to take bold steps on the climate at a meeting in Copenhagen in 2009, but that fell through with no deal. Then it helped drive the Paris Agreement, only to bail on it under Trump. While China is the world's biggest emitter of greenhouse gases, it's made commitments to lower emissions and poured money into green technology. In September, Chinese leader Xi Jinping announced his country would reach carbon neutrality in 2060.

LI: In a way, the U.S. is playing catch up and in their eyes, Chinese eyes, they've been kind of holding the fort. It is, you know, politically unfair from their perspective that the U.S. now comes back and is asking others to do more.

RUWITCH: But he says the Chinese leadership knows there needs to be some engagement. When Biden appointed John Kerry as his climate czar, China's government quickly pulled veteran climate negotiator Xie Zhenhua out of retirement. The two worked together when Kerry was secretary of state, says Joanna Lewis.

LEWIS: I saw that as, you know, a really direct signal that China was willing to engage on this issue with the United States.

RUWITCH: But the question is, how? Kerry says he wants to ring-fence climate issues from other points of friction. Beijing sees it as inseparable from the bigger picture. Analysts say that's why Beijing hasn't said yet if Xi Jinping will attend President Biden's virtual climate summit this week. Edward Cunningham is a China energy expert at Harvard University.

EDWARD CUNNINGHAM: From the Chinese perspective, they feel that they're both ahead in terms of what they've committed. And it's now part of a much larger chessboard.

RUWITCH: A chessboard where they face a Biden administration that wants to confront them on issues like human rights and compete in areas like global tech leadership. Secretary of State Antony Blinken said on Monday the U.S. was falling behind China in climate-related industries.

ANTONY BLINKEN: If we don't catch up, America will miss the chance to shape the world's climate future in a way that reflects our interests and values. And we'll lose out on countless jobs for the American people.

RUWITCH: Some think competition could create a race to the top in R&D, technology and manufacturing. Harvard's Edward Cunningham says there's also an opportunity to compete with China in financing green projects in other countries.

CUNNINGHAM: And I think particularly the developing world could benefit greatly by some form of increased guided competition on sustainable infrastructure. And I think it's also a useful time for us to ramp up because China's lending has been declining.

RUWITCH: As far as Li Shuo of Greenpeace is concerned, really only one thing is important.

LI: I think what we need to ensure is that these two countries move towards the same direction, towards decarbonization.

RUWITCH: Whether they do so holding each other's hand, he says, is less critical. John Ruwitch, NPR News. Transcript provided by NPR, Copyright NPR. 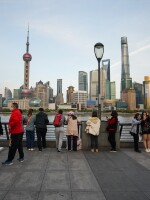