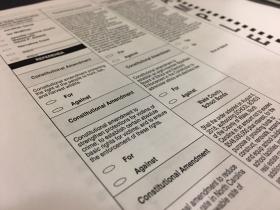 The state elections board will hold a hearing this month on possible vote tampering in North Carolina's 9th Congressional District race. The key question is whether there's enough evidence to warrant a new election.

For North Carolina Republican Party Chair Dallas Woodhouse, the threshold must be pretty high--the evidence would have to show enough questionable votes to change the outcome.

Listen
Listening...
/
Rusty Jacobs reports on what it would take to call for a new election in North Carolina's 9th Congressional District.

"If you don't have enough votes that you can determine it could have changed the outcome, you would be disenfranchising several hundred thousand people who cast legal ballots," Woodhouse said, in a telephone interview.

In the current case, Republican Mark Harris leads Democrat Dan McCready by 905 votes. Despite the tight finish, McCready conceded after Election night. But since then, the state elections board has declined to certify the results because of irregularities with absentee ballots in Bladen and Robeson counties. Both counties have more registered Democrats and significant minority populations.

A majority of the elections board, including two Republican members, voted to hold an evidentiary hearing on or before December 21st.

The fourth prong, though, says only that the board may call for a new election when "irregularities or improprieties occur to such an extent that they taint the results of the entire election and cast doubt on its fairness."

"Under the statute, you don't have to prove there would have been a different outcome, just that you'd be in the neighborhood," said Allison Riggs, a voting rights attorney with Southern Coalition for Social Justice.

Of course, the U.S. House of Representatives could assert its authority over the matter, according to Gerry Cohen, who served as counsel at the North Carolina General Assembly for 37 years and helped draft election laws.

"If either candidate filed a contested election protest with the House, it would refer to the house committee on administration to investigate," said Cohen.

Or, Cohen said, any house member can make a motion on opening day for another member to step aside pending an investigation.

Appeals of a state elections board decision in this case would go to the U.S. House of Representatives, which starting in January will have a Democratic majority.