The Mississippi River is swelling to near record height as it rolls past St. Louis, Missouri. It is expected to crest some 10 feet above flood stage there, thanks to a deluge of spring rain, and there's still more rain in the forecast.

Recreational boating has stopped, and the flood's effect on the shipping industry is significant. Barge traffic is also at a halt. Several locks have been closed, and grain shipments to Gulf Coast ports are being delayed.

CHRIS MCDANIEL, BYLINE: Floods are nothing new for West Alton, a small Missouri town just north of St. Louis. West Alton sits precariously between the swelling Missouri and Mississippi rivers. Today, about 20 farmers here have traded their tractors for sandbags to try to shore up flood defenses. Jason Farley is one of the volunteers slamming sandbags down onto a road that's aptly named Riverlands Way.

MCDANIEL: Farley says floods like this one are just part of life out here.

MCDANIEL: And Farley has reason to be worried.

How far away is your house?

MCDANIEL: Farley points to a farm only about a quarter of a mile away. He says if the water rises too much higher, he won't be able to plant soybeans in the coming weeks. But he's quick to add this is nothing like the flood of 1993.

FARLEY: It'd be about five feet over your head right now in '93.

MARK FUCHS: People are drawing comparisons, and understandably so.

FUCHS: Whenever the river gets up this high, there's an awful lot of water already in the system, and that's what it takes to generate a similar event.

MCDANIEL: Across the river in Alton, Illinois, the Mississippi River is at 13 feet above flood level, and it's forced the town of about 500 to begin evacuations. The U.S. Coast Guard has closed the river in St. Louis to all barge traffic, and says it'll stay closed until the flood waters recede, which might be a while. The Coast Guard's Colin Fogarty says the rain-gorged river is running at a breakneck pace.

COLIN FOGARTY: Right now, the river is flowing in Saint Louis harbor at about 11 knots, which is a huge amount of force, especially when the river is only running about half that. There's also a large amount of debris floating down the river, and these aren't just sticks and twigs. These are complete trees.

MIKE PETERSON: The fast rise we've had on the Missouri River and the climbing levels on the Mississippi, there have been a lot of levees being overtopped by water. These are smaller, agricultural levees protecting conservation and farmland, basically. But the Corps is out right now on the federal levees, making sure that the levees and floodwalls that protect population centers and infrastructure are secure.

MCDANIEL: Although the river appears to have crested in some parts, there is more rain in the forecast. Back in West Alton, Missouri, Farley says they're coping now.

FARLEY: If it keeps going like it's going, we won't be able to harvest a crop and get a crop into harvest this year. So what's in will probably be damaged, most of it. You just can't do much with it. 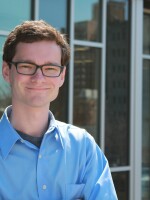 Chris McDaniel
Chris McDaniel started at St. Louis Public Radio as a political reporter, predominantly covering the race between Senator Claire McCaskill and Congressman Todd Akin. Before coming to St. Louis, Chris worked at NPR stations in Louisville, Kentucky and Columbia, Missouri, and his work has been broadcast on NPR’s national newscasts. He is a proud graduate of the University of Missouri, where he studied journalism and political science. He is also the winner of the 2011 PAX East Super Smash Bros. Tournament. Chris enjoys dogs, anything by Cormac McCarthy, and listeners like you.
See stories by Chris McDaniel
Latest Stories