Toussaint Romain will lead the Charlotte Center for Legal Advocacy

The Charlotte Center for Legal Advocacy has a new chief executive officer. As a former public defender, law professor and civil rights activist, Toussaint Romain is no stranger to the legal system.

In his new role, Romain says there are three core values that the Advocacy Center is focusing on, which are part of the organization’s vision to build a just community.

"The first is safety which is especially important," Romain said. "Second is economic security so people can take care of their basic needs. And finally, stability because we want to make sure folks know that they’re in an environment where it’s going to be stable and that they’re able to move forward with the hope of upward mobility and economic opportunity.”

Romain says the Advocacy Center partners with other organizations so they can offer more than legal services.

“We’ve been involved in the community since 1967 to really help that child, that mother, that immigrant, that person with disabilities, that veteran and that senior," Romain said. "That’s what’s most important, and we get to do it on a daily basis."

For the nonprofit to continue serving the community, it also asks for the support of time, talent and funding. Romain says that allows the center to expand its services, while also meeting the needs of those at the Advocacy Center who are passionate about this work.

Romain is the center’s first leader of color. Beforehand, he was the deputy general counsel for Appalachian State University and an assistant public defender in Mecklenburg County. 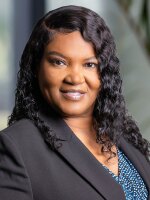