Let's hear now about the boomtown of Sioux Falls, S.D. That's right, boomtown. The South Dakota city thrived through the recession and businesses are still growing, which has gotten it a lot of attention. South Dakota public broadcasting's Kealey Bultena reports that the quality of life in the area, and the state's lenient tax laws, are two of the reasons why.

KEALEY BULTENA, BYLINE: South Dakota may be called the Rushmore state, but it's much more than that one famous mountain. It's 77,000 square miles, much of it flat farmland. John Deere tractors like this one roll through corn and soybean fields in the hot sun. It's a Great Plains tableau that is upended just a few miles away. Sioux Falls is tucked into the extreme southeast corner of the state, and it's anything but a typical prairie town.

It's South Dakota's largest city by far, even though only 156,000 people live here. It's 10 o'clock on a Saturday night, and South Sudanese women here are looking over racks of vivid African garments in a small corner store. Down the street, music is blasting in the low lights of Lalibela Ethiopian restaurant.

MULUGETA ENDAYEHU: I'm so glad - America, they are adventurous so they try the food.

BULTENA: Endayehu's business is one of dozens of restaurants and stores established by immigrants here; 22,000 Sioux Falls residents speak Spanish as their primary language. It's a cosmopolitan environment in an area often viewed as monocultural. Mayor Mike Huether spends lots of time trying to debunk the notion that Sioux Falls is just a backwater town.

MAYOR MIKE HUETHER: And I know what people are thinking. Oh, this guy is just, you know, full of hot air. That's just a small town thinking that they're bigger than what they really are.

BULTENA: But the mayor says Sioux Falls has the numbers to prove it. During the recession, Sioux Falls was able to stockpile millions in reserves. In fact, CNBC calls South Dakota America's top state for business, in part because of its low cost. The hefty banking sector here is strong, in part because of a lack of usury limits, making it easier for banks to charge higher interest rates.

There are also no corporate or personal income taxes here. But with rapid development come the inevitable growing pains. City leaders are pressured to improve infrastructure as Sioux Falls sprawls, and developers planning new neighborhoods are clashing with farmers who've tilled the land for generations. Sioux Falls welcomes 3- to 4,000 new residents each year.

Casey Williams is one of them. He does the kind of medical research that used to mostly occur only at big universities on the East or West Coast.

CASEY WILLIAMS: On the first real full date that I went out with my wife, she basically said, you know we're moving back to Sioux Falls at some point, right? And I just kind of laughed, and she didn't laugh.

WILLIAMS: I now have a better balance in my life. I'm not, you know, working endless hours where I don't even see my children.

BULTENA: Bitter cold is certainly one challenge as is absorbing thousands of people each year, which puts a constant threat on resources. While leaders here tout low unemployment, established businesses sometimes complain that they can't find qualified workers. Sioux Falls is spending more on growing its police force to deal with the demand. Meanwhile, Mayor Mike Huether says Sioux Falls's conservative budgets, and cushy reserve, are nothing more than what he calls boring South Dakota common sense. He hopes that strategy will prevent this city from going bust when this boom ends. 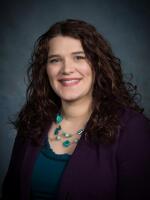 Kealey Bultena
Kealey Bultena grew up in South Dakota, where her grandparents took advantage of the state’s agriculture at nap time, tricking her into car rides to “go see cows.” Rarely did she stay awake long enough to see the livestock, but now she writes stories about the animals – and the legislature and education and much more. Kealey worked in television for four years while attending the University of South Dakota. She started interning with South Dakota Public Broadcasting in September 2010 and accepted a position with television in 2011. Now Kealey is the radio news producer stationed in Sioux Falls. As a multi-media journalist, Kealey prides herself on the diversity of the stories she tells and the impact her work has on people across the state. Kealey is always searching for new ideas. Let her know of a great story! Find her on Facebook and twitter (@KealeySDPB).
See stories by Kealey Bultena
Latest Stories