Black Farmers Wait For Debt Relief As Program Is Stalled

Wisdom Jzar, a first-generation farmer, weeded the garden beds on his farm on a recent Thursday before moving to pull fresh eggs from the chicken coop. He's the head farmer at Deep Roots CPS Farm, an urban farm his wife, Cherie, owns on a quarter acre in northwest Charlotte. They want to create organic food options for urban communities.

But Jzar has another mission: to increase the number of Black farmers in the industry.

“We understand the need for us in this space, to be at the table when policies regarding farming is concerned,” he said, “to have a say and be able to put a voice in that has not been represented for so long in that space.”

The U.S. Department of Agriculture was set to provide debt relief to Black farmers this month as part of the American Rescue Plan, but two court rulings have put the funding on hold.

Jzar doesn’t have a loan from the USDA. But he says debt relief for Black farmers is crucial, especially for older farmers who often had higher interest rates on loans and stricter stipulations than white farmers.

“They could not miss a single payment,” Jzar said. “They were basically given the loans, hoping for them to fail so they can do a land grab. So that's happened so much, and you get farmers breaking their necks just to pay off the loan so they can hold on to their land.”

In 1865, the government promised newly-freed enslaved people in the South "40 acres and a mule," only to snatch it back months later, killing an opportunity to build generational wealth.

A 1982 report by the U.S. Commission of Civil Rights found that Black farmers faced “racial discrimination, lack of institutional economic support, commercial lending practices, commodity and income supports, and tax structures geared to benefit large farm operations,” all of which led to a decline in Black farmers. By 1997, the number of Black farmers decreased by 98%, leaving 18,500 Black farmers.

The USDA reported about 2,000 Black farmers in North Carolina, compared to 70,500 white farmers. Archie Hart, who works with small and minority-owned farms at the North Carolina Department of Agriculture and Consumer Services, said the decrease is mostly due to an “unlevel playing field” for Black farmers.

“They were not being served like other farmers,” Hart said. “And even when they were serviced, one of the biggest problems that we find is that even when a farmer went in to put in the loan application, they would take so long to give them the monies. They could not produce a crop or be able to provide for their families or to maintain a homestead.”

Farmers received $26 billion during the COVID-19 pandemic under the Coronavirus Food Assistance Program. Of that, Black farmers only received about $21 million.

Jzar says the discrepancy has been devastating.

“If you're still using a mule, while other farmers are getting subsidized to get used tractors and the newest equipment, new processing equipment and getting education subsidized, then you can't compete,” Jzar said.

Congress and President Biden intended for the American Rescue Plan to provide relief. It includes $4 billion for the USDA to pay up to 120% of loan balances for “socially disadvantaged farmers,” or farmers of color, who had loans backed or guaranteed by the Farm Service Agency.

Payments were to begin going to farmers this month. However, lawsuits against the USDA filed by two groups of white farmers — one in Wisconsin and the other in Florida — have stalled the payouts.

“If they want to fix past discrimination, they can go and fix past discrimination,” said Dan Lennington, an attorney at the Wisconsin Institute for Law and Liberty. His group represents 12 farmers from nine states. They are calling for the government to treat everyone the same, regardless of race, when it comes to paying off loans.

“Just forgiving everybody's loans unconnected to past discrimination is what we're challenging,” he said.

Hart said it’s not just about fixing past discrimination but also about creating an equitable industry for all farmers and giving farmers of color the same opportunities for success as white farmers.

“If you put a hole in the roof of a house and a hurricane comes up, then after the hurricane is gone, you repair the roof,” Hart said. “Well, the house is still destroyed and it's still wet and all of that.”

While the program is stalled in the courts, Lennington says Congress needs to address the fate of the program. Until then, Black farmers are left to do what they’ve been doing for years: Wait.

Correction: This story has been updated to reflect that Wisdom Jzar's wife, Cherie, is the owner of Deep Roots CPS Farm. 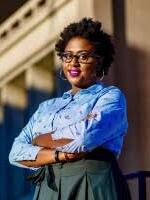