A.W. Burgess founded his Charlotte-based nonprofit, Family Mankind, three years ago to end the cycle of domestic violence alongside child abuse and bullying. The organization works to identify the root cause of violence and provide resources for positive changes.

Burgess decided to focus on offenders because he said the change has to start there first to break the cycle of domestic violence. Growing up in Baltimore, Maryland, Burgess says his family abused him, and that experience played a part in his abuse toward his childhood girlfriend.

“Most people think it was just physical violence. That was a part of it, but there was a lot of emotional abuse, a lot of psychological abuse, that I was inflicting upon her,” Burgess said. “And that had been occurring for six years, since we were kids, from the age of 15.”

In 2017, there were nearly 9,000 domestic violence-related incidents filed by police, according to reports by Mecklenburg County Domestic Violence Dara Warehouse. Simple assaults and communicating threats were the most common charges tied to domestic violence that year.

Drew West has been volunteering at Family Mankind for more than a year and has developed effective communication skills.

Charles Smith joined Family Mankind to improve his relationship with his fiancé and create a better life for their two children.

“I was willing to do whatever it takes to make sure there is stability and structure, calmness instead of chaos in our home,” Smith said.

Burgess said a second chance turned his life around. During high school, he played football and baseball, which led to a full scholarship at Oklahoma State University. He had a promising career until he was charged with abducting his then-girlfriend and holding her hostage, trying to control their relationship. He faced 36 years in prison but served 14 months after a judge ordered a psychological test based on recommendations.

“A lot of it had to do with the victim’s family, the warden, the counselors,” Burgess said. “Everyone that obviously had an engagement with me.”

With the help of a doctor, Burgess identified his “IT,” which refers to as internal trauma. He said his “IT” was the verbal, emotional, and psychological abuse he suffered as a child. Part of the goal of Family Mankind is to help court-ordered and program volunteers find their “IT.”

Family Mankind offers resources for those who commit domestic violence and for survivors. For instance, the "Man to Man to Family Man” program works with incarcerated individuals and provides them with behavioral and mental coping skills to handle problems. Another program called “Mentour & Womentour” is available to support young people to ensure they don’t suffer in silence. There’s also a program called “Survivor Sessions.”

Burgess said offenders must be supported to break the cycle of domestic violence.

“Most of society believes that once you’re an offender, you’ll always be an offender, and that’s not true,” Burgess said. “It starts with your mindset, but someone has to help you.”

Family Mankind has partnered with UPS Inc. to create the “Shift Your World, Life & Career Hiring Event.” The event will provide career opportunities and access to mental health services and will take place at 601 East 5th Street, Charlotte, on Nov. 15th from 10 a.m. to 2 p.m. 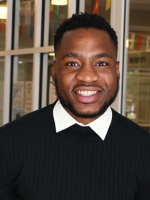