People in more than a dozen states won't hear much clucking or squawking at their county and state fairs this summer. That's because poultry shows have been banned in those states due to the devastating outbreak of bird flu. This doesn't mean that no one's getting a ribbon for chicken showmanship this year though. From member station WMUK in Kalamazoo, Sehvilla Mann reports that organizers of those events have a plan.

SEHVILLA MANN, BYLINE: The strain of bird flu that emerged last December has been a plague on American poultry. Tens of millions of birds have either died from it or have been killed preemptively. That's disrupted not just agriculture, but a venerable and growing pastime - showing birds in competitions. Valerie Miller tracks bird events across the country. She counts more than 600 related events in an average year. But in recent weeks, she's scrambled to stay posted on all of the bird flu-related cancellations.

VALERIE MILLER: When it comes to the juniors and the 4-H'ers who are doing chickens, if they suddenly have a year where they can't do this fair, you know, the concern would be, are they going to continue the next year? If they have to wait a full year, will they keep their flocks and keep things going, or will they move onto the next thing 'cause, you know, the future of this hobby is the younger people.

MANN: Groups like 4-H seem determined to hold their members' interest through a year when the birds have to stay home. To that end, many groups will go ahead with their competitive shows with pretend chickens.

KATIE OCKERT: They're not made the same way as a stuffed animal would be because we kind of thought that that was a little cheesy.

MANN: Katie Ockert is with the Michigan State University Extension and says there's been something of a run on plush chickens recently.

OCKERT: So they're actually made with feathers, and if you didn't know that they weren't a live bird if they were sitting there, you would actually think they were a live bird.

MANN: State and county chapters are also treating the ban as an occasion to celebrate all things poultry- related. Nebraska's planning an egg-painting contest. Barbecues are in the works. And Colleen Burke, who's in charge of poultry for one Michigan county fair, says there will be at least one chicken dance-off.

COLLEEN BURKE: The regular polka chicken dance, the (singing). That one.

BURKE: You have it. And so that's the one we're going to focus on.

MANN: Burke's daughter, Lacey, has won many awards for her birds. She's standing by a big tree in her yard where a flock of turkeys is enjoying the shade. She says showing a mock bird will be tougher than presenting a live one because she'll be judged on her knowledge.

LACEY BURKE: People a lot of times think when they do have a nice bird that they can slack-off and let the bird pick up for them, or that if it's already trained, it'll do whatever it's supposed to do and you don't have to work that hard. But now the competition's on a whole new level.

MEGAN MILLER: It gives you the chance to actually show what you've got and it's more focused on you. And I think it'll be cool because the littler kids might have a better chance.

MANN: It's not only young bird enthusiasts who are struggling with the ban. Valerie Miller says some grown-ups had talked about holding an online bird show. But in the end, they decided it wouldn't be enough like the real thing. Mostly, she says, everyone hopes things will be back to normal next year. For NPR News, I'm Sehvilla Mann in Kalamazoo. Transcript provided by NPR, Copyright NPR. 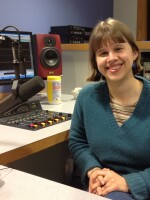 Sehvilla Mann
Sehvilla Mann joined WMUK’s news team in January 2014 as a reporter on the local government and education beats. Before that she covered a variety of topics, including environmental issues, for Bloomington, Indiana NPR and PBS affiliates WFIU and WTIU. She’s also written and produced stories for the Pacifica Network and WYSO Public Radio in Yellow Springs, Ohio. Sehvilla holds a B.A. in French from Earlham College and an M.A. in journalism from Indiana University.
See stories by Sehvilla Mann
Latest Stories