This week, the city of Greensboro, N.C., celebrated the retirement of a barking baseball legend. Ms. Babe Ruth is a black Labrador retriever. She fetched bats and delivered baseballs for the minor league Greensboro Grasshoppers. She worked 649 consecutive home games - a streak that came to an end last night. Sean Bueter of member station WFDD was there.

SEAN BUETER, BYLINE: Greensboro baseball fans saw a beautiful dog trot onto the field, carrying a metal bucket with Babe hand-painted on the side. She's made this delivery at least a thousand times before, but last night was different. For Ms. Babe Ruth, it's retirement day, and many fans didn't want to see her go.

LONDON KERN: That makes me so sad. She's been a staple here at the park since I can remember.

FELIX HERNANDEZ: Exactly, yeah. It's definitely something unique that's to the Grasshoppers and something that I think will bring, you know - or has brought a lot of joy to a lot of people coming to the games.

MACKENZIE GRANT: Most games, they sit up there, and we can pet them. And I'm going to miss petting Babe Ruth.

BUETER: That's London Kern, Felix Hernandez and MacKenzie Grant. For nine seasons, Babe played the role of bat dog, and she never missed a home game. She had two jobs - deliver new balls to the umpires and wait patiently by the dugout for a Greensboro hit so she could cheer...

BUETER: ...And then fetch the bat, or the stick, the batter left behind. Babe's dedication has made her a star in Greensboro. On Sunday, the team threw her a red-carpet retirement party. The mayor gave her a key to the city, and the National Baseball Hall of Fame is adding her signature bucket to its museum collection. Grasshopper player Mason Davis says his teammates love her too.

MASON DAVIS: Every time I go on deck to hit, I'll, you know - I give her a little pat on the back for good luck.

BUETER: Does it work?

BUETER: Last night, Babe was good luck for the Hoppers. They won their final home matchup of the season. After the game, Babe's owner, team president Donald Moore, walked her out onto the field. He says he's proud of her and, at nearly 10 years old, she's earned her retirement even though she looks ready for another year.

DONALD MOORE: I think if she knows she's done, she's probably mad, but we'll see. I'm sure she's happy. She loves this. She always has, and - yeah, she loves it.

BUETER: Her replacements were there to see her off - Yogi Berra and Ms. Lou Lou Gehrig. Babe couldn't end her career, though, without enjoying a final home game tradition. Moore let her go off her leash, and after a moment's hesitation, she dashed off around the bases one last time. For NPR News, I'm Sean Bueter in Greensboro, N.C. Transcript provided by NPR, Copyright NPR. 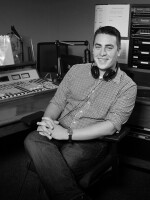 Sean Bueter
Since joining NIPR in March 2011, Sean has worked to raise the news profile of WBOI by increasing its presence around the community. He's also helped bring WBOI to a national audience by placing local stories on NPR's flagship shows and APM's Marketplace Morning Report. Sean is the local host of Morning Edition and former co-host of Midday Matters.
See stories by Sean Bueter
Latest Stories