A bright red phone sits on the desk in NPR's main studio in Culver City, Calif. It's an '80s era hotline that serves as a permanent link for host David Greene to his counterparts in NPR's headquarters in Washington, D.C. No number. No ring time. Just a permanent connection. It's the first thing the members of the alt-pop trio MUNA mention when they sit down for their interview.

"We should have that in our houses," Naomi McPherson says.

"We should!" Katie Gavin and Josette Maskin both agree.

In many ways, they do. The musicians of MUNA pride themselves on their ability to connect. The band's latest album, Saves the World, is a shimmering homage to that cause.

"I've learned so much from them about intimacy, and what it requires in terms of showing up in a vulnerable way," Gavin, the trio's singer-songwriter, says as she gestures to her bandmates, producer and guitarist McPherson and guitarist Maskin.

"All I have to do is look at Katie, and I'll start crying," McPherson says. "It's just like there is an intense emotional connection between the three of us."

The band met in college when Gavin was scheming to start a punk band while at the University of Southern California. "I literally showed up on the scene like, 'Who wants to be in a riot grrrl band?' But then slowly we figured out that I don't actually like punk music that much," Gavin remembers.

MUNA's music wonders what pop might sound like if it was made by punks, and what relatability could feel like to people who have always felt different. It soars and sinks, questions and answers. Like the band who makes it, the music itself seems to find solidarity in difference.

"I think from my perspective at least, the fact that we have found each other and have such a rich friendship has made us feel substantially less alone and less different," McPherson explains.

MUNA's first record, About U, was confessional, but Saves the World is about them. It's clear from the opening track to the final fade that the band's sophomore album is an emotional excavation. The music presses its nose into the mirror of the hardest moments of their lives: drugs, alcohol, heartbreak and suicide. Gavin says this is the most personal project she has ever been a part of.

"I say on the record I identify as an addict, and the way I see addiction is more of a mechanism than being addicted to any particular substance," Gavin says. For her, the main addiction is to patterns of behavior. "It takes me a long time to get over a relationship that in the first place wasn't even good for me. But the reason I don't care about talking about it is I know I'm not alone."

Saves The World feels like an archaeological dig — painstakingly and poetically exploring emotional detritus and laying it out over pop synth that feels intellectual as well as deeply emotional. Gavin's lyrics melt into McPherson's beats and Maskin's guitar reaches out in some of the album's most profound moments.

"I'm there to make sure Katie knows she isn't alone, Maskin says. "I'm the other voice. My guitar is saying, 'It's all same here. I have felt that way, too.' I think about feeling that kind of ache, and not having anyone to turn to." 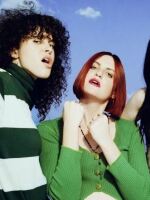