Officials say four people are in custody in Strasbourg, France. This after a shooter opened fire near the city's famous Christmas market yesterday. Authorities say at least two people were killed, 14 others wounded. Jake Cigainero is in Paris to tell us more. Good morning, Jake.

MARTIN: What more are we learning about exactly what transpired at the Christmas market?

CIGAINERO: Well, you know, it's a week night close to the holidays. So people and families are out doing their shopping and enjoying the festive atmosphere in the city center. But police say that around 8 p.m. local time, a man opened fire on a central plaza near the Christmas market by the big cathedral there. Soldiers patrolling the area exchanged fire with the gunman, wounding him, according to police. But the attacker escaped.

Since the attacks in 2015 and 2016 here in France, higher security, whether it's police or military patrols, are pretty routine at sensitive sites like big monuments and here at Christmas markets. But a shopkeeper said that in the area - a shopkeeper in the area told French TV he had heard gunshots, and a crowd ran by his store. That lasted about 10 minutes, he said. But authorities were able to identify the gunman using surveillance footage.

Two areas of the city went on lockdown around the Christmas market and the suspect's neighborhood. Strasbourg is right on the border with Germany. So German police also went on high alert and tightened border controls. And as you know, Strasbourg is home to the European Parliament. So the European Parliament also went on lockdown until early hours this morning. The shooter is still on the loose, and there are about 400 police on the ground looking for him.

MARTIN: So he's still on the loose. But we said that four people are in custody. So what do we know about the suspect?

CIGAINERO: Right. Well, so these four people in custody are people who are close to the suspect. The terrorism unit of the Paris prosecutor's office has opened an investigation into the shooting. They say he was a 29-year-old man born in Strasbourg with a criminal record unrelated to terrorism. His criminal record was mostly robbery in France and Germany, where he spent prison time.

The shooter had already been flagged for surveillance by security services for religious radicalization after his time in prison. But the interior ministry said he was not suspected of plotting any attacks. And they haven't officially called this terrorism yet. Police had apparently gone to his home in Strasbourg yesterday morning to arrest him on allegations of homicide, but he wasn't there. However, they did find grenades in his home. They think the visit to his home might have triggered the attack yesterday.

MARTIN: And this isn't the first time that this Christmas market's been targeted either, it it?

CIGAINERO: That's right, Rachel. The market draws about 2 million visitors a year, and so it makes it a big target. Almost 20 years ago, French and German police thwarted an al-Qaida plot to bomb the Christmas market. And that terror cell was dismantled and sent to prison.

MARTIN: So the suspect is still at large. You are monitoring all of this from your base in Paris. What are you hearing about what it is like on the streets of Strasbourg right now?

CIGAINERO: Well, from the images that I'm seeing on TV, the streets are pretty empty. But schools are open. The high schools and elementary schools - classes are not being held though. Everyone is on high alert. They've raised the terror alert here in France. The interior minister went directly to the scene last night. And as I said, there are 400 police on the ground looking for the gunman. And security at other Christmas markets around the country, including here in Paris, have been increased.

MARTIN: Thank you so much for the update. Jake Cigainero reporting from Paris on the shooting that happened at the Christmas market in Strasbourg and related arrests. Jake, thanks so much. 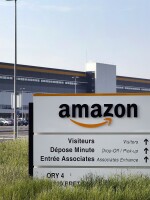