Local News
News Of Note
Here are some of the other stories catching our attention.

Duke Energy has been the subject of a lot of criticism lately, and it’s not all about coal ash.

For the past month, Duke had workers apply a chemical to the roots of trees near power lines in Charlotte’s Myers Park, Dilworth and Sedgefield neighborhoods. Needless to say, many residents were quite upset.

This week, Duke responded to those concerns by suspending the program. But Duke plans to restart the program after the company retools its outreach efforts.

It started about a month ago when many homeowners in Charlotte found informational hang-tags on their front doors. Victor Ahdieh lives near Freedom Park: “It basically said that Rainbow Treecare would be applying this chemical, Cambistat, to these trees that were in the Duke Energy right-of-way,” he says.

Rainbow Treecare is a Minnesota company Duke Energy hired for the project. The tag they distributed says Duke is evaluating Cambistat, what it calls a “tree growth management product.” The tag claims the chemical “gently” slows tree growth, and can actually make trees more drought resistant by “redirecting energy normally spent on growth” into making leaves thicker and greener and roots stronger. 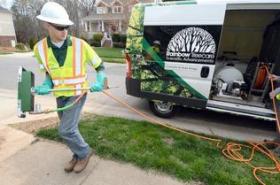 Workers still come through to trim just as often – about every 5 years. But with the Cambistat reducing the amount of growth, Duke hopes they’ll be able to move much faster. When you’re clipping hundreds of trees a day, she says, any time savings really adds up.

But Cambistat also carries risks: children and pets, for example, should stay away from soil that’s been treated for several days. People shouldn’t eat fruit or nuts from a tree for a year after a tree is treated. Duke says it’s not putting the chemical on fruit and nut trees, though. But none of this information was on those door tags.

“There’s not a skull and cross bones or any of those more hard-core warnings on that product,” she says.

And even for animals and children, who might eat some of the soil, she says it’s “almost non-toxic.”

“You would have to eat a tremendous amount in order to get anything that would make you ill,” Fair says.

She says Cambistat can actually benefit large, older trees, which can be harmed when utilities have to prune several limbs.

Some Duke customers thought the Rainbow employees were trying to sell them something when they knocked on doors to explain what they were doing. So Duke spokeswoman Paige Layne says her company is going to re-vamp the way it explains the Cambistat program to residents.

The city of Charlotte gave Duke permission to treat trees in the public right of way, but the company says people will be able to opt if their property is adjacent to the right-of-way.

Duke isn’t saying how soon it plans to re-start the Cambistat program, but this time, the company says it’ll be sure to let everyone know about it.