DNA from a genetically modified goat, a spritz of perfume, sculptures so small you need a microscope to see them.

They're all headed for the moon.

The MoonArk is a sort of eight-inch-tall portrait of humanity, with more than 200 artists and designers contributing to it. There's space reserved for it on one of the privately-funded Moon missions competing for the Google Lunar Xprize.

Lowry Burgess, a professor at Carnegie Mellon University and the MoonArk project lead, holds up one of his contributions, a vial full of red liquid. A drop will go in the Ark.

Specifically, 33 artists' blood, all mixed together. Some of the artists are pretty famous, he says, but he won't namedrop.

He's doing the same thing with a mixture of water from some of the world's rivers.

All told, there are hundreds of items in the Ark. Burgess says each one is like a word in a poem.

"A poem is like a bell ... every word in a poem rings and makes all the rest of the other words ring," he says. "So in this, everything that's there is making something else ring. So the totality is meant to hum together."

You may have realized that this is conceptual art, where the idea is more important than any traditional aesthetic.

Or you can think of it is as a time capsule, with its contents open to interpretation.

Burgess sees it as a cultural outpost in space waiting to be discovered.

"We're desperately hoping that whoever opens it is perhaps a little more evolved than we are," he says.

Unlike some earlier space art, like the Golden Records on the Voyager craft floating beyond the solar system, the Ark will stay in one place.

But Mark Baskinger, one of the artists on the project, says the point is not to conquer.

Other artists are just interested in the collaboration — some don't even really care about space or who finds it.

And while some of the artists are prone to intellectualizing, others will let themselves get a little emotional.

Dylan Vitone's contribution includes ordinary text messages between him and his wife.

"Cynical me is critiquing the way we broadcast our life. The sentimental me is kind of celebrating this thing that's really important for me and trying to give it more meaning than it actually has," he says.

A copy of the Ark will stay here on Earth to be exhibited.

But in space, weight is money, so the team has had to be innovative with materials. The Ark's four chambers will weigh less than six ounces.

I pick up one of the aluminum outer shells. It's so light it almost feels flimsy, but it's designed to last hundreds of years.

Suddenly, the moon is personal.

My fingerprints are just a simpler form of self-expression than the other items on the MoonArk.

Irina Zhorov
Irina Zhorov is a reporter for Wyoming Public Radio. She earned her BA from the University of Pennsylvania and an MFA from the University of Wyoming. In between, she worked as a photographer and writer for Philadelphia-area and national publications. Her professional interests revolve around environmental and energy reporting and she's reported on mining issues from Wyoming, Mexico, and Bolivia. She's been supported by the Dick and Lynn Cheney Grant for International Study, the Eleanor K. Kambouris Grant, and the Social Justice Research Center Research Grant for her work on Bolivian mining and Uzbek alpinism. Her work has appeared on Voice of America, National Native News, and in Indian Country Today, among other publications.
See stories by Irina Zhorov 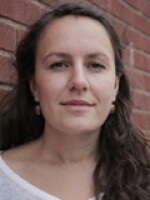