When I was growing up in the early 2000s in Jersey City, N.J., I was, for the most part, ashamed of my family's cultural heritage. I felt the heat of embarrassment when substitute teachers butchered my name during morning roll call and when my large, boisterous family piled into restaurants shouting at one another in foreign dialects. But my most vivid memories of my shame took place on a train.

My family immigrated to the U.S. from Nepal. We didn't own a car, so when we attended Mustangi cultural gatherings in New York City, we would cross the Hudson River from Jersey City into Manhattan on the PATH train. My mom always forced me to wear a bakhu, the long Mustangi dress we reserve for special occasions like Tibetan New Year, prayer ceremonies and weddings. I would beg her to let me wear "normal clothes" on the train and then change into my floor-length bakhu, but she wouldn't budge.

Wearing this elaborate garb in a public space where everything is still and subject to examination — and in my impressionable young mind, harsh criticism — was absolutely mortifying. Being trapped under the train's bright fluorescent lights made me feel particularly exposed and out of place.

I eventually grew out of those feelings as I got older. I became more aware of my cultural identity, of the beauty and pain within the Mustangi diaspora, and of my people's complex relationship to the Tibetan plight. Though the people of Mustang are ethnically Tibetan, the region of Mustang is located in Nepal. So when China's violent occupation of Tibet began in 1950, Mustangis remained relatively unaﬀected because they happened to live on the opposite side of an arbitrary border. Even today, Mustangis in Mustang can exercise a fair amount of cultural and religious freedom while their Tibetan counterparts cannot. I can travel freely across borders and return to a place that my family calls "home" while many of my Tibetan friends cannot. That history is not lost on me.

That being said, I still felt uncomfortable wearing a bakhu in non-Mustangi spaces. So, I decided to finally confront the discomfort by wearing bakhus as I traveled across the U.S. with two friends. We drove, rode buses and took trains from Jersey City to Oakland, Calif. — two cities my family calls home. Along the way, I took a series of self-portraits.

This post-grad summer adventure was also a rite of passage for us, our first attempt at the Great American Road Trip. But not every cross-country experience is like a Jack Kerouac novel, especially if you're a woman of color.

There were reminders of America's existing injustices everywhere. I felt the weight of history as I sat in Emancipation Park in Charlottesville, Va., with my friend Quinn, a black American woman. It was the same park where white supremacists gathered in 2017 in a harrowing display of hatred. I felt it when I visited the border wall in Nogales, Ariz., with my friend Sam, a Cuban-American, shortly after reading the heartbreaking ProPublica report on forced migrant family separation. Most of the locations we visited were picked in an effort to better understand ourselves and our places within the political and cultural history of this country.

Our monthlong trip through the South and up the coast of California was a slow and steady one, and so I thought it best to shoot this series on film. I carried a Mamiya C330 and a tripod so I could set up the composition and lighting, then had a friend push the shutter.

I also carried with me the spirit of three other projects: My Identity by the Tibetan artist Gonkar Gyatso; Roaming by American artist Carrie Mae Weems; and the South Asian American Digital Archives Road Trips Project.

The intense unease that I had once felt while wearing a bakhu as a child disappeared almost as soon as the trip began. I forgot I was wearing one by the end of the first day. To my surprise, I only got a handful of verbal reactions during the entire journey. And most of the interactions were brief and pleasant. In Charlottesville, an elderly bodega owner from Iraq asked me in broken English: "Where your people are from?" I told him, he nodded, then continued to ring up my purchases. In Nashville, Tenn., a young girl told me she really liked my dress.

Looking back at it now, it's almost funny to think about how much insecurity I had projected onto this article of clothing. I imagine the generations of Mustangi women born before me who wore their bakhus with confidence and pride; I imagine my mom, holding the hand of her embarrassed daughter on the train, wearing her bakhu with boldness and grace; and now I see myself, in these portraits, a young Mustangi-American woman with a deeper understanding of the historied beauty of the bakhu and the person wrapped in it.

Tsering Bista is a video producer and photographer based in New York City. 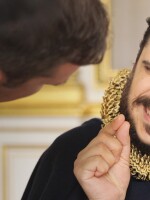