10 Songs That Say Something About North Carolina

There's a reason the mixtape (or CD, or playlist, or .zip file) holds such sentimental power. A good mix can feel like a letter from a best friend, with each track carefully aligned with one's personal tastes. But the truly excellent ones are like being handed a key ring to the cosmos, with each track unlocking a door to a new world to explore. North Carolina may not take up that much space on a map, but it's home to an abundance of musical worlds. North Carolina Public Radio has spent the past year talking to artists about their favorite songs that say something about our home state. Their stories are included in our yearlong Come Hear NC Series. Here are 10 songs that embody just a few of our state's treasures.

The rumble of locomotives through the sleepy mill town of Carrboro inspired Elizabeth Cotten to write her signature song. The gentle, lilting tune — with Cotten's singular picking style at the forefront — became a folk-music staple. In England, the song boomed within the skiffle movement of the late '50s; back home, Cotten and her guitar prowess became a revered (if still underrated) pillar of Southern music.

While my family and I were on vacation in Honduras last winter, a man asked where we were from. When we told him "North Carolina," he immediately responded with, "Oh! Petey Pablo! Come on and raise up!" Such is the enduring power of Petey Pablo's 2001 hit. With "Raise Up," the rapper gave North Carolina a prideful, hard-driving anthem that became a bona fide radio smash. To this day, you can hear it bouncing around the rafters during basketball at the Dean Dome. And it might be the only song to name-check Pasquotank County.

Like Cotten's "Freight Train," "Foggy Mountain Breakdown" transcends the field of niche North Caroliniana into icon territory. Earl Scruggs became a pillar of bluegrass with his development of a unique three-finger, rolling picking style on the banjo. "Foggy Mountain Breakdown," which shot to fame in part for its appearance in the 1967 movie Bonnie & Clyde, displays the Shelby-born Scruggs at his finest. The tune remains a bluegrass standard.

"North Cack" is the high-energy spiritual successor to Petey Pablo's "Raise Up," delivering a fresh new rallying call for the state's younger generation. Durham rapper G Yamazawa leads the way with boastful bars about barbecue sauce, and fellow North Carolinians J Gunn and Kane Smego add their own impressive flexes. They're just three of the great rappers to come out of North Carolina in recent years.

Doc Watson is another titan of the Old North State, recognized for his intricate and melodic flatpicking on the acoustic guitar — skills he developed after losing his eyesight due to a childhood illness. "Southbound" captures Doc and his son Merle as they trade nimble, springy licks behind Doc's inimitable singing voice. Merle died in a tractor accident in 1985, and Doc passed away in 2012, but the town of Wilkesboro still honors their legacies with Merlefest every April.

Etta Baker and John Dee Holeman are a Piedmont blues dream team, exemplifying the style of fingerpicked acoustic music that had close connections to Durham's once-booming tobacco industry. Here, they take on "Crow Jane," a tune attributed to Skip James. Those who live near Durham can still occasionally catch a live performance from Holeman, who's now 90.

At their genesis, the Carolina Chocolate Drops — Justin Robinson, Dom Flemons and Rhiannon Giddens — sought out old-time fiddler Joe Thompson for deep lessons in the history of black string bands in the South. More than just an ode to two staple Southern sides, "Cornbread and Butterbeans" is an entrée into another realm of traditional-music history.

Assembled in Raleigh, Chatham County Line established itself as a bridge between bluegrass traditions and a fresh interpretation of those influences. "Crop Comes In," from the band's 2010 album Wildwood, is a bittersweet but gorgeous example of the state's contemporary batch of excellent roots musicians. The song's leading harmonica line recalls a summer breeze cutting through tall grass, while multi-part harmonies give "Crop Comes In" a high-lonesome edge.

No, it's not General Johnson and Chairmen of the Board. But with her own "Carolina Girls," Des Ark's Aimeé Argote speaks to restless young hearts trying to figure out where they belong in the world. The main mood of "Carolina Girls" isn't nostalgia, but a more in-the-moment realization of being ready to return to a familiar, comfortable place. It's also a reminder that home is more than an address or county lines — it's the people around you, too.

James Taylor, "Carolina in My Mind"

What, you thought we forgot? Recorded in England with Paul McCartney and George Harrison singing backup, Taylor's classic cut from 1968 has long been a heartfelt favorite for North Carolinians from Asheville to Avon. Though Taylor pines for the state's friendly climes and moonshine, his aching expression of unshakable homesickness is a sentiment with universal applications.

For more of this month's Slingshot Scenes, check out 5 Festivals You Have To See In Raleigh & Durham.

All songs are currently available to stream on NPR Music's Slingshot playlist on Spotify . 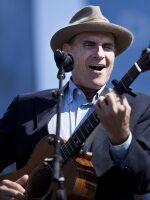