Time magazine called him one of the world's 100 most powerful and influential people. Now John Bogle weighs in on the current direction of America with his new book, The Battle for The Soul of Capitalism.

Bogle, who founded the Vanguard Group of mutual funds in 1974, was the company's chairman until 2000. Vanguard, one of the largest fund groups in the world, holds accounts totaling more than $800 billion. 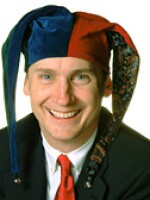 David Gardner
David Gardner, co-founder of The Motley Fool, is one of the country's most respected and trusted sources on personal finance and investing. As an educator, author, lecturer, and media personality, David wears many different hats. David can be heard on the weekly Motley Fool Profiles podcast, available through npr.org, and as a financial commentator elsewhere on NPR.
Latest Stories