South Korea on Tuesday tightened nationwide restrictions on gatherings and travel to suppress the country's third wave of coronavirus infections since the start of the pandemic. Beginning Christmas Eve, South Koreans cannot eat out in groups larger than four. Skiing and skating venues will be closed.

Popular tourist destinations, typically swarmed on New Year's Day with people hoping to catch the first sunrise of the year, will be shut down.

The new measures, which will be in effect through Jan. 3, follow the capital Seoul's ban earlier in the week on private assembly of five or more people. The capital area, which accounts for more than 70% of last week's new infections in South Korea, upped the regional alert level three times in the past month. But case numbers have yet to demonstrate a downward trend.

The country recorded four new highs for infections in the past two weeks and the highest number of deaths for the second day in a row on Tuesday. At least one person has died at home while waiting for a hospital bed, the country's disease control agency confirmed.

Unlike previous spikes, the latest wave of infections has no central cluster. Instead, infections have occurred in a large number of small, scattered clusters in public places like restaurants and churches. To help contact tracers catch up with the rapid increase in cases, the government recently dispatched police and military personnel to conduct contact tracing and expanded free testing.

But the government has been hesitant to impose social distancing guidelines at the top level, closing all nonessential businesses, fearing the economic impact. Since the fall, South Korea's policy of "sustainable" social distancing has been to minimize mandatory shutdowns and allow social activities as long as fine-tuned guidelines are followed, such as occupancy limits and temperature checks.

Now, South Korea's biggest and longest-lasting outbreak is challenging that policy. Health Minister Park Neung-hoo told the nation in a briefing earlier this month, "This is not the time to engage in activities while following antivirus measures. It's time to refrain from all social activities." 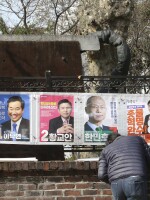