The 14-hour transplant took place Tuesday. Most of the cost - "hundreds of thousands of dollars" - was covered by his military insurance and Medicaid, according to a report by the News & Observer.

Due to a burst appendix at age 6, Nauta was left with multiple intestinal blockages from scar tissue throughout his life. He eventually developed an inability to eat and lived with tubes and waste bags before almost dying due to an infection last year.

Prior to his surgery at Duke, it was recommended that he look into hospice care.

Nauta, with his new abdominal wall and his first bellybutton since he was 11, is now fully functional. He is able to eat unassisted and is expected to be discharged soon. 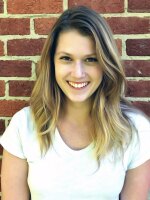 Kylie Moore
Kylie Moore is the Digital News and Engagement Editor at WFAE. Prior to joining WFAE in October 2018, she was the Associate Editor at Charlotte Agenda, where she helped to guide editorial structure and strategy for both the website and daily newsletter, spearheaded multiple ongoing series and curated and developed social media for both Charlotte Agenda and high-profile clients such as Coca-Cola and Lyft. She has received critical acclaim from the North Carolina Press Association for her editorial work.
See stories by Kylie Moore
Latest Stories