In her new book, Good Booty, music critic Ann Powers embarks on a wide-ranging history of pop music in America. The title, she says, was inspired by Little Richard's 1955 hit "Tutti Frutti."

"In the song we all know it's 'Tutti frutti, oh Rudy,' " Powers explains. "But in the original version, which Little Richard first sang ... it was 'good booty.' And the lyrics were very, very dirty, frankly. They were all about greasy, sexy, exciting encounters; something you couldn't play on the radio."

Powers' book, which is subtitled "Love and Sex, Black and White, Body and Soul in American Music" looks at more than a century of music as a lens through which to explore American views on sex, race and spirituality.

"Body and soul are inseparable ..." she says. "And I think music is that connective tissue that reminds us that all of our experiences, even transcendent experiences, are generated in our bodies."

On how Little Richard inspired the book title

On the affect rhythm has on our bodies

One thing I discovered while researching this book was there's a term called "entrainment" and it's a term that has to do with the nervous system and how certain things outside of our bodies can actually affect our bodies and kind of change our nervous system cycles; the way our heart beats ... the way ... our nerves feel and music has that power. ...

All music is rooted in rhythm, but particularly American music, which is defined by an African foundation and an African diaspora foundation. And so the rhythms that came through the Middle Passage, through the Caribbean to the states, which we still hear today, in you know, the music of Beyoncé, the music of the Top 40 in general. Those rhythms move our body in a particular way and help us kind of feel the things that we don't name.

On music and sex

[It's] a cliché to say that popular music and particularly rock 'n' roll is about sex or is, you know, motivated by sex, sexual feelings. But I wanted to go deeper. ... I wanted to go beyond just that kind of clichéd statement. Oh yeah, of course, this is "dirty music" or whatever and really think about how, in every era from the 19th century to the present, the particular anxieties of the time and the possibilities of that time were reflected in and shaped by music.

On music and race

In the origins of the recording industry, black and white recordings were segregated by race and, of course, this is a key aspect of the story. I say early in the book that there is absolutely no way to talk about American music — or frankly America in any way — without discussing the oppression of African-Americans, the enslavement of Africans. ...

All of those things are just foundational in our culture and especially in music because, really music was the lifeline, the conveyor, for African Diaspora culture to live on as enslaved Africans became African-Americans ... through the Jim Crow era into the 20th century, into the era of civil rights and into our present day.

Music is the carrier of legacies and it's also a place in which cultures mix ... sometimes through appropriation and theft, sometimes through genuine collaboration. And I wanted to look at all of that stuff. It can be hard to talk about, but I think it's super important.

On using music as a guide through history

I think every era poses different challenges and limits and also offers different possibilities. ... Right now we're in such an incredibly challenging time in terms of relating to each other across lines of identity and recognizing oppression and some of the most intense realities of our own history. I think music can guide us through that history in a very deep way, including the history of race relations and particularly relations between African-Americans and white people in this country.

Certainly issues of appropriation arise. ... But what I think is that music reflects the best of us coming together but also has offered a way for communities to preserve their own traditions and legacies and to speak to each other through those legacies.

So music ... I'm not saying it's utopian. I really don't believe that and I'm not saying that it's all about liberation. I think it's important to recognize that in music we share our ugliest emotions as well as our most beautiful emotions.

Elizabeth Baker and Janaya Williams produced and edited the audio of this interview. Maquita Peters adapted it for the Web. 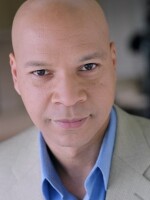 Dwane Brown
Dwane Brown is a multiple award-winning newscaster for NPR and joined the network in December 2015. He is the first newscaster to broadcast from NPR West in Culver City, California. His newscasts air during All Things Considered.
Latest Stories