Cape Cod Community To Vote On Status Of Wind Turbines

Next week, voters in Falmouth, Massachusetts decide whether to spend $14 million to tear down two wind turbines - or turbines if you prefer. The Cape Cod town installed these turbines just three years ago in an effort to produce renewable energy and cut costs. Nearby residents says the turbines are a health hazard and that the only cure is to take them down.

SEAN CORCORAN, BYLINE: With the two 400-foot-tall turbines slowly spinning in the background, Rob Laird talks about climate change and how he first thought the machines would be part of the solution.

ROB LAIRD: This is great. This is going to solve lots of problems. And you know, look, it's right in my backyard, which is, you know, that's kind of neat 'cause it's this new cool thing coming along. And then they turned it on. And it wasn't 20 minutes after it was turned on when I called Town Hall and like, this thing's really loud.

CORCORAN: Laird lives about 1,300 feet from the closest turbine, which helps power the town's wastewater treatment plant. Since it began spinning in spring 2010, some 40 neighborhood households have complained about things such as headaches, vertigo and sleep interruption, which is what Laird experiences.

LAIRD: We've got to come up with alternative power sources and stop burning fossil fuels. There's no question about it. I just - I'm not sure that putting a wind turbine - if you - you can't make a neighborhood uninhabitable. I think that's the problem, and that's what this has done, in effect.

CORCORAN: Falmouth was among the first towns in Massachusetts to install large turbines so close to homes. When people complained, the town tried curtailing their operation when it got real windy. Then they shut them off at night. They even considered buying out the homeowners.

But now Board of Selectman chairman Kevin Murphy says the turbines simply need to come down.

CORCORAN: Initially, complaints about health impacts were met with skepticism, and for three years the turbine issue festered. Today there are bumper stickers and lawn signs reading: Heal Our Town. And many residents, who don't even live near the turbines, say they have to go.

ROB MASTROIANNI: These folks living up on Blacksmith Shop Road, they are not nimbies, whiners or liars.

CORCORAN: That's Rob Mastroianni. He doesn't live near the turbines, but as a taxpayer he would have to pay for their removal. Selectmen say taking down and paying off the debt will cost the typical Falmouth household about $800 over 20 years. Mastroianni says he'll pay it.

MASTROIANNI: If my taxes go up a little bit, that's a small price to pay.

CORCORAN: Not for resident Joe Hackler. Amidst a chorus of weed-whackers and clucking chickens, he questions the legitimacy of the noise complaints.

(SOUNDBITE OF MACHINERY AND CHICKENS)

JOE HACKLER: That noise you hear in the background is a lot louder than those machines ever are.

CORCORAN: But neighbors typically don't object to the whoosh-whoosh sound of the turbines. Rather they talk about something called infrasound, a low-frequency sound that's controversial and not well understood. Selectman Doug Jones explains it has a vibration or sound pressure that gets reflected off the turbine itself and towards the homes.

DOUG JONES: It's not something you hear. But that's the thing that they say it just makes them feel sick. And that's the one we don't have tons of scientific evidence to really affirm.

CORCORAN: Complaints about wind farms appear to be increasing in some parts of New England, where things already are crowded and turbines are being installed closer to homes.

Andy Brydges is with the Mass Clean Energy Center, which works with Massachusetts to develop wind projects. He says the wind industry and its advocates are reacting to complaints.

ANDY BRYDGES: The wind industry is paying attention to the complaints people have had and are reexamining their siting strategies and decisions based on those complaints. And I think they're very focused on developing projects that will be ultimately well-received by the community, which serves everybody's interests better.

CORCORAN: Voters in Falmouth go to the polls on Tuesday to decide whether the turbines here should come down. 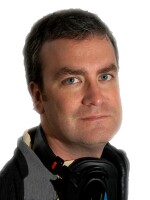 Sean Corcoran
Sean Corcoran is both news director and senior reporter at WCAI in Woods Hole. He also is a managing editor for WGBH Radio. He began producing investigative series for WCAI in 2005, after moving to Cape Cod. In 2006 his 20-part series "Two Cape Cods: Hidden Poverty on the Cape and Islands," won the Alfred I. DuPont-Columbia University Award, considered the highest award in broadcast journalism. Recent series' topics include the Pilgrim Nuclear Power Plant; wind power; Alzheimer's Research and caregiving; military groundwater pollution; our changing energy systems; special education; and various science, health and ecology-related stories. For the first nine years of his career Corcoran worked as a staff reporter for various New England newspapers before moving to public radio. Corcoran is a graduate of The George Washington University and the Columbia University Graduate School of Journalism. He is a former 3rd grade teacher and adjunct journalism professor. He occasionally performs onstage with his father, an accomplished Irish entertainer. He lives on Cape Cod with his wife, Linda Corcoran, who is heard on-air on Friday mornings in her capacity as the Managing Editor at the Cape Cod Times. The couple has a young son, Seamus.
See stories by Sean Corcoran
Latest Stories