Makaya McCraven: The Brain Behind The Mind-Bending Beats

Makaya McCraven — a drummer-producer-bandleader-composer who sums up his MO with the evocative term "beat scientist" — has lately been on the hottest of hot streaks. His album Universal Beingswas hailed as one of the best albums of 2018, by outlets ranging from The New York Timesto Rolling Stone.(In the NPR Music Jazz Critics Poll, it came in at No. 4.) For McCraven, who lives in Chicago, this vaulting acclaim is just the latest evidence that he's onto something vital and new.

Jazz Night in America devotes this episode to McCraven, his innovative process, and the creative background that continues to inform his work. We'll look at the precedent of record producers splicing tape in the studio, and how it applies to McCraven's constructive methods. We'll meet his earliest influences — his parents, African-American drummer Stephen McCraven and Hungarian folk artist Agnes McCraven. We'll join McCraven in a thrilling recent performance at the Red Bull Music Festival Chicago, on the South Side, with partners including Nubya Garcia on tenor saxophone, Brandee Younger on harp, Jeff Parker on guitar and Joel Ross on vibraphone.

"I don't think what I'm doing is necessarily that far off of the legacy of jazz that I grew up in," McCraven observes, before acknowledging the persistence of debates about what jazz is, or should be. "I think one of the things that gives it strength is that people want to argue over it. That's a good sign. That means there's life here." 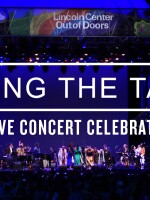 Sarah Kerson
Sarah came to WBGO in 2018 after spending time at WNYC and WCBS 880 as a producer and news assistant. As a production assistant at WBGO, she works with Jazz Night in America and on other WBGO programming. She developed a love for music as an undergraduate at Barnard College, where she DJ'ed blues, country, soul, and hip-hop shows at WKCR. Sarah got her start in public radio as an intern in the Michigan Radio newsroom in her hometown of Ann Arbor, Michigan.
Alex Ariff
See stories by Alex Ariff
Latest Stories