'The Deep' Sings With Many Voices

Yetu's life is not her own. A member of the mermaid-like, undersea race called the wajinru, the main character ofThe Deephas been chosen as the newest historian of her people. As such, she must gather their ancestral memories, and bear them in pain until the annual ritual of sharing, called the Remembrance. Historians suppress their own personal desires, identity, and memories in service of their fellow wajinru — but Yetu is not happy about this arrangement. She rebels against the duty that's been thrust upon her, even as that rebellion parallels a much more perilous threat — the surface dwellers, called two-legs, who have begun to encroach on the idyllic existence of the wajinru in their rapacious search for oil. With their invasion comes the realization of a brutal truth: Yetu and her people are in fact descendants of the two-legs, the offspring of the thousands of captives thrown overboard to drown during the height of the transatlantic slave trade.

Immersive, gut-wrenching, and poetic, The Deep did not come into being the way most novels do; its origin is beautifully convoluted. It began as a song titled "The Deep," one of the highlights of Splendor & Misery, the Hugo Award-nominated science-fiction concept album by --- the experimental rap group made up of William Hutson, Jonathan Snipes, and original Hamiltoncast member Daveed Diggs. The song, which was written at the request of the producers of This American Life, sketched out the story of Yetu and her plight even as it drew from the mythos created 20 years earlier by Drexciya, an obscure techno group from the mid-'90s who littered their work with references to a race of aquatic people descended from drowned slaves. So "The Deep" was already a collectively conceived narrative before acclaimed speculative-fiction writer Rivers Solomon assumed authorship — with all due credit to their predecessors — of the novel of the same name.

The Deep, therefore, is credited to Solomon, Diggs, Hutson, and Snipes, with copious thanks given to Gerald Donald and James Stinson of Drexciya. This kind of collective, incremental composition is something more common in television, film, and comics than in prose — and The Deep is even more remarkable in the uncanny way it crosses over between media. But what makes the novel more than just a winning exercise in multimedia storytelling is the way this collective narrative mirrors the way Yetu and the wajinru amass memories, store them in the historians, then relive them together once a year. In the book, the wajinru's method is not perfect — hence their gradual loss of their true origins. But it's an organic process that gives new meaning to the idea of a living document; a telepathic tradition of history that points profoundly at the many ways humanity records, and fails to record, its own past.

For all its complexity in origin and concept, 'The Deep' is an elegantly concise and simple novel.

For all its complexity in origin and concept, The Deep is an elegantly concise and simple novel. Yetu's plight is an essential, emotionally fraught conflict between duty and sacrifice, between tradition and progress, between the individual and the common good, and between vengeance and forgiveness. Furthermore, enjoying the story doesn't require any foreknowledge of clipping., Drexciya, or the mythology of the wajinru that precedes it; while those elements certainly enrich the novel, Solomon's text stands alone as a wise, daring, touching, and important addition to the Afrofuturist canon, and one that carries its own rhythmic and melodic grace — not to mention a wholly relevant and righteous gravity. 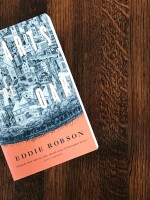