Is Sam Darnold the Panthers' backup plan, the Carolina 10 and the hot dog straw

We are entering the most exciting sports season, and I have writer’s block. Maybe it's just all of the excitement. Speaking of blocks, as in trade block, I don’t expect to see Sam Darnold on the trade block anytime soon even though Baker Mayfield was named the starting QB for the season for the Carolina Panthers. Unless the coaching staff really believes in P.J. Walker as the backup signal caller, it would be wise for Matt Rhule and company to keep Darnold around.

The Carolina Hurricanes signed forward Paul Stastny to a one-year, $1.5 million contract earlier this week, according to Don Waddell, the team's president and general manager.

"Paul is an extremely reliable veteran who has been effective at both ends of the ice for his entire career," said Waddell. "He adds even more experience and leadership to our forward group, and we are excited to have him in Carolina."

The move became necessary after the team lost recently acquired forward Max Pacioretty for six months due to a ruptured Achilles.

I don’t care at what level, an inside-the-park homerun is always special. And, it was no different for White Sox farmhand Mark Payton, as he raced around the bases for his 18th home run of the season, an inside-the-park job for the Triple-A Charlotte Knights on Sunday.

Stop what you are doing & WATCH THIS!!!!@MarkPayton2 with an INSIDE-THE-PARK HR!!!! pic.twitter.com/UbHXEneVcZ

I’m unveiling a new addition to the column this week. Every week, I will have a Top 10 list having something to do with sports. This week, with the help of this article from ESPN (subscription required), I rank the ten Division I football programs in the Carolinas.

The Absurdity of sports: hot dog straws, NIL at Hooters and 'what's in a name?'

Each week, I think to myself, “what happens if nothing absurd is out there?” Then I forget how we live in the digital age.

I’m a fan of beer. I’m a fan of hot dogs (if you’ve ever met me, you could take one look at me and tell). And, I’m a fan of multitasking. But this New York Yankees fan might have taken multitasking to a whole new level with his hot dog straw.

According to a report from ESPN, Hooters disclosed this week that it has signed 51 offensive linemen from college football teams throughout the nation to name, image and likeness contracts.

The restaurant is now in contact with athletes from Auburn, LSU, Oklahoma, Miami, Georgia Tech, Missouri, Texas A&M, Vanderbilt, Florida Atlantic, and USF after announcing that it preferred to sign offensive line units rather than single athletes.

It looks like Golden Corral dropped the ball on a very marketable moment.

Lastly, the South Carolina Gamecocks' live rooster mascot will need a new name due to legal reasons. What it boils down to is that the arrangement enabling the use of the Sir Big Spur moniker with the original proprietors has ended. As a result, the local paper The State offered up a few suggestions for a new nickname and ran a poll. The overwhelming winner: Cock Commander, by 69%. I can’t believe I went to journalism school to type that sentence. 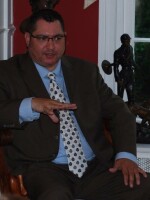